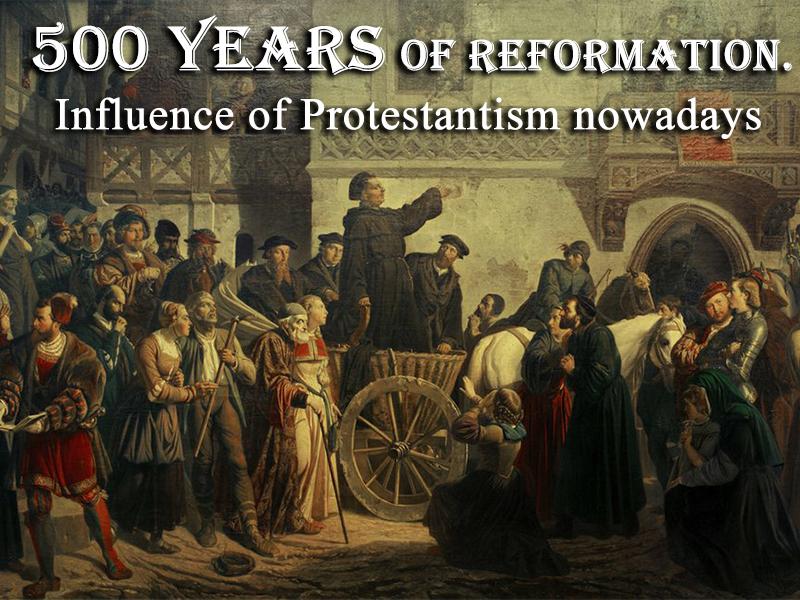 The 16th-century religious, intellectual, social, cultural and political movement that changed Catholic Europe and set in place the structures that would largely define the development of the generations to come - this is the most concise definition of reformation you can probably find anywhere. The movement that in a great way defined the development of the continent is much more complex phenomenon and its significance cannot be squeezed into just one sentence. Many scholars and scientists have been studying the age of reformation for years now and its impact can be seen in our everyday lives whether we are aware of this fact or not.

Reformation. Why that happened?

The Reformation has started in 1517 with Martin Luther’s “95 theses” that questioned the Catholic Church which had an immense influence in the society at that time in Europe. Over the centuries it was deeply involved in the political and social life of Western Europe which resulted in political manipulations and spiritual bankruptcy of the Roman Catholic Church. By his 95 theses Martin Luther attacked not only the corruption of the church but he also went to the theological roots of the issue (what initially caused reformation was the perversion of the doctrines about God’s grace and redemption).

The reformation age is believed to have lasted for 38 years having far reaching impact on the society. The Protestant Reformation has purified the church creating new ones that focused on the Word of God rather than mere tradition. This has influenced not only the religious aspect of peoples’ lives but also it had economic impact as well. From the teachings of John Calvin, another famous reformation leader, there emerged so-called “protestant work ethic” which contributed to the development of the economic system of capitalism. Religious reforms promoted anti-authoritarianism which ultimately led to the democratic movement around the world (through the recoil against the feudal system). More than that, the abolition of slavery can be traced back to the principles emerged out of the reformation age.

Martin Luther and John Calvin as main leaders of reformation

Martin Luther and John Calvin are considered two main people who have launched the Protestant Reformation. They had very similar views on such theological doctrines, as the redemption and grace which motivated them to oppose the Roman Catholic Church at the time. They were both totally committed to God’s Word and lived their lives to accomplish the will of God. Interestingly enough, although Martin Luther and John Calvin were the two leaders of the Reformation, it is believed they never met each other as they lived in different countries.

Although they had many things in common, they also had some distinctions in their teachings. They didn’t agree on a couple of theological issues which resulted in the creation of different branches or Protestantism. Nevertheless, the distinctions in theological views they had didn’t stand in the way of initiating religious reforms in the countries they resided within. Reformed Catholic Church was something they both wanted to achieve despite all persecutions and hardships they had to go through. These two leaders remain great examples of how sincere faith and commitment can change the corrupt systems.

Reformed Catholic Church nowadays. 500 years of reformation celebration in the US

Despite the hardships and all persecution each of the reformers had faced (there were many others apart from Luther and Calvin who were attacking the corrupt Catholic Church in the 16th century), in 2017 the world will celebrate 500 years of reformation. Despite the European origin of the holiday, there are many events planned in the USA to commemorate the age that brought so many positive changes in the society.

Passionate reformers have achieved many things among which is the Reformed Catholic Church which is different today from what it used to be in the 16th century. It doesn’t have such an absolute authority over the lives of people as the Bibles are now available almost in any country and city (as opposed to the time when the only church could read and interpret the Book). The Renaissance and reformation are somewhat similar; in their core lies the revival of the true values and virtues. This revival has brought up many good things we can enjoy today, including economic and democratic development.

Tweet
Related Posts
Argumentative Essay Topics + Infographics Writing Ideas Good Persuasive Essay Topics Writing an Essay on Environmental Pollution How to Rewrite My Paper How to Write a Case Study in APA
Comments:
Your comment is awaiting moderation.
Login form
Get Started Free!
Call Me Back
Please, provide your contact details and
We will call you as soon as possible.
Flexy
Login and Get Started
Just fill in the form below